The Songwriters Association of Canada (SAC) is a collective of composers, lyricists, songwriters and supporters of Canadian song, founded in 1983 and headquartered in Toronto.  Its mission is to aid in the development of the Canadian songwriting community through creative and business ventures as well as advocacy. Membership to the organization is open to all amateur and professional songwriters. The organization is divided between voting members (songwriters) and associate members (supporters), accounting for over 1,300 members nationwide. 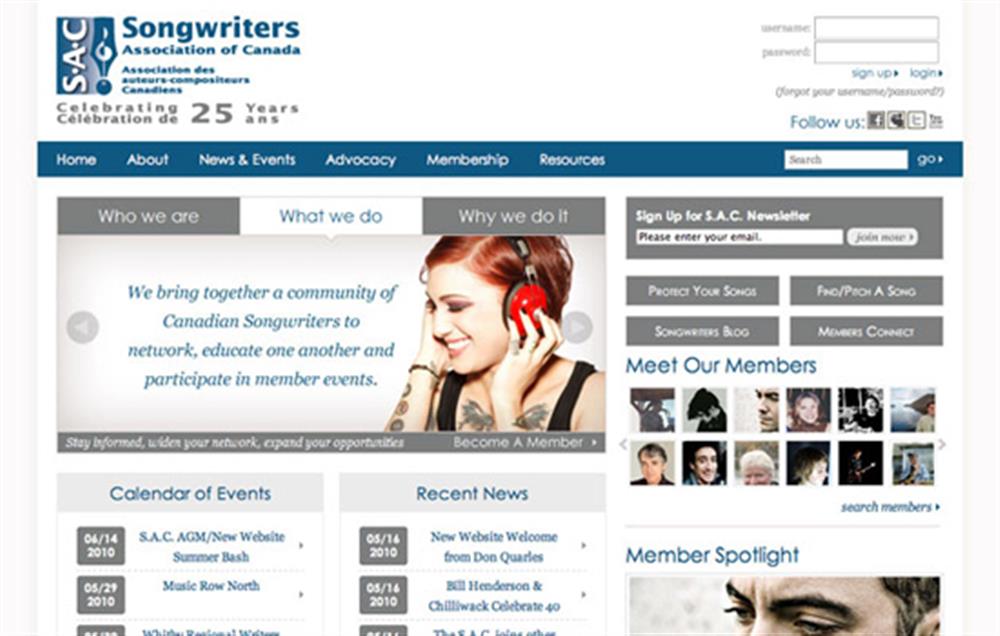 As the only national arts service organization dedicated solely to Canadian composers, lyricists and songwriters, the SAC aims to provide opportunities for networking and for individuals to better their craft by providing opportunities for community-building among members. The SAC provides many services to its members in order to ensure that members are compensated fairly for the use of their work, and to foster a propitious environment for music creation in Canada.

The SAC believed that a fully customized and highly robust web platform could become a facilitator in the achieving their organizational goals. 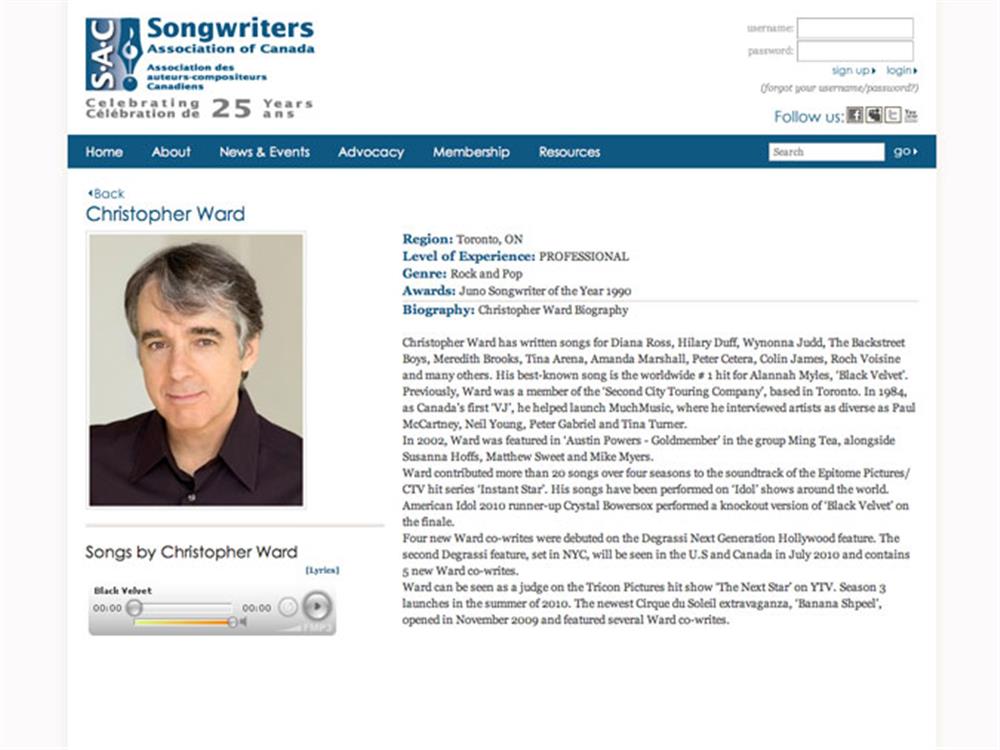 Wired Solutions began working with the Songwriters Association of Canada in 2009, and initially brought their objectives to gain a stronger web presence to life by developing an entirely new web presence for the organization. Key facets of the establishment of the SAC’s web presence included the custom development and integration of a fully customized website and content management system, as well as a fully customized member management system and events manager.

The SAC’s website was powered by a customized version of Wired CMS, our proprietary content management system, which ensured that SAC administrators maintained full control over website content. In addition, SAC administrator’s maintained the ability to update and add images and content for featured songwriters, songs of the month and videos of the month, through a ‘what you see is what you get’ (WYSIWYG) fashion.

In addition, an online chat room was developed to allow members to discuss items of interest while also gaining input from other SAC members. Furthermore, the Executive Director’s blog was developed to support comment threads, which allows members to make comments as well as build their own network of mentors within the industry.

To further the SAC objective of developing an online song assessment tool, we developed the Date with a Demo service, a custom software that allows Songwriters to submit their songs for assessment by veteran songwriters, directly though the Song Assessment application. This web-based tool allows songwriters to post songs to the system, pay a fee, and have staff delegate which song assessor should assess each song. The assessor in turn listens to the song directly within the web-interfaces, then critiques the song via an easy-to-use assessment system, which we custom developed to facilitate the streamlined workflow.  Once the song assessment is complete, the system generates a PDF report and sends it directly to the songwriter. In addition, music managers can create an account within the platform in order to request songs for movie scenes or commercials. SAC members looking to request a song are required to complete a simple Request Form. In response, the system generates a real-time notification to songwriters indicating a request has been made. Songwriters can then pitch up to 2 songs per request in the hopes of the music manager choosing their song.

In addition, we developed the fully customized Song Library engine in order to allow songs to be group together and added to the various database libraries stored within the application. Developing Song Libraries provided a versatile way to logically group Songs for a number of users such as allowing a Song Requester to search for songs that exist in the system or to create a dedicated Song Vault. We developed the Song Library Engine to include full administrator-driven management, whereby administrators can add, edit and remove Song Libraries via a secure admin-only web interface.  The Library Engine also allows for audience permissions to be set according to a user’s role within the system (i.e. Songwriters, All Users, Song Requestors, or Administrators), which effectively locks down content according to the custom Roles Based Security framework.

The Songwriters Library supports intuitive search functionality based on keyword search and built-in filter options (i.e. song genre, date posted, new songs only, rating, etc.). In addition, the Library entries support user rating functionality, in which users can rate a song overall using a standard star-rating system.  Songwriters also maintain the ability to choose which Song Libraries their songs belong to based on the user security permissions ability to each Library.